Espen Uhlen Jørstad is an Ambassador for Unibet Poker and regularly streams on his Twitch-channel. The Norwegian pro has $133,289 in live-tournament earnings, including a $31,729 score from the 2018 Malta Poker Festival, and has been a regular in the mid-stakes cash games and MTTs online for more than a decade now.
In this exclusive interview, Espen talks about life/poker balance, brewery science, his Twitch-channel, and other things.

Unibet Poker welcomes new players with a €200 first deposit bonus, while cash backs up to 62% are available for everyone. Those who register on this page will also be entitled to our exclusive €5,000 race at the site with an average extra rakeback of 20% each month for a total of 82%!

When and how did you start playing poker? What was the major turning point for you when deciding to go pro and when did it happen?

Well, I got introduced to the game through a friend in gaming (Warcraft 3 TFT). I think we quickly realized we could use some of our “strategic prowess” from the RTS game Warcraft to poker. The ability to perform many tasks simultaneously also translated well from gaming to multi-tabling poker online. I was playing semi-pro for a bit back in the days, but I had no real ambitions or professionalism. I was mostly just bumhunting HU cash games NL400-NL1k, to pay for traveling, clothes, partying and whatever else occupied me at the time. Looking back at it I regret not having more of a work ethic/drive back then, as the games were so much easier than what they are nowadays.

How did you become a Unibet ambassador and why is it beneficial for you and the company? Was there a special reason why you chose Unibet?

I became a Unibet ambassador almost by accident. Well maybe an accident is not the right word, but It was one of those right places at the right time-moments. I had just started streaming on Twitch, and I sent an email to Unibet just explaining how I was gonna be streaming cash games playing on Unibet since that was 95% of my volume at the time anyways. I told them that if they liked what they saw, then maybe we could do some collaborations or so in the future. When they received that email, they were basically in the middle of creating an ambassador team and were scouting for potential prospects. Sometimes lucky, huh? Now I’ve been with Unibet for a couple of years, give or take – and it’s been great. I think they are doing a lot of the right things for online poker, trying to cater for the recreational players by removing the option to use HUDs, seating scripts and other software that help the pros gain their advantage.

What stakes do you play nowadays and how many hours do you grind? How do you see online games nowadays? What are your thoughts on the widespread HUD-ban trend and other recent changes? Unibet's been doing great in the past few years despite not allowing HUDs.

These days I play mostly MTTs, with an average buy-in of $180. Online games are getting tougher and tougher every year, but to be honest, we are still all kinda shit at the game. Definitely, when it comes to ICM I still see a lot of major mistakes being made, even by the so-called “end bosses”. Safe to say I still make a lot of them myself as well. And yeah as I mentioned above, Unibet was at the forefront when it came to banning HUDs and other software. Now we see many other companies in the industry also following this route of thinking, which overall I think is great for the future of the industry. 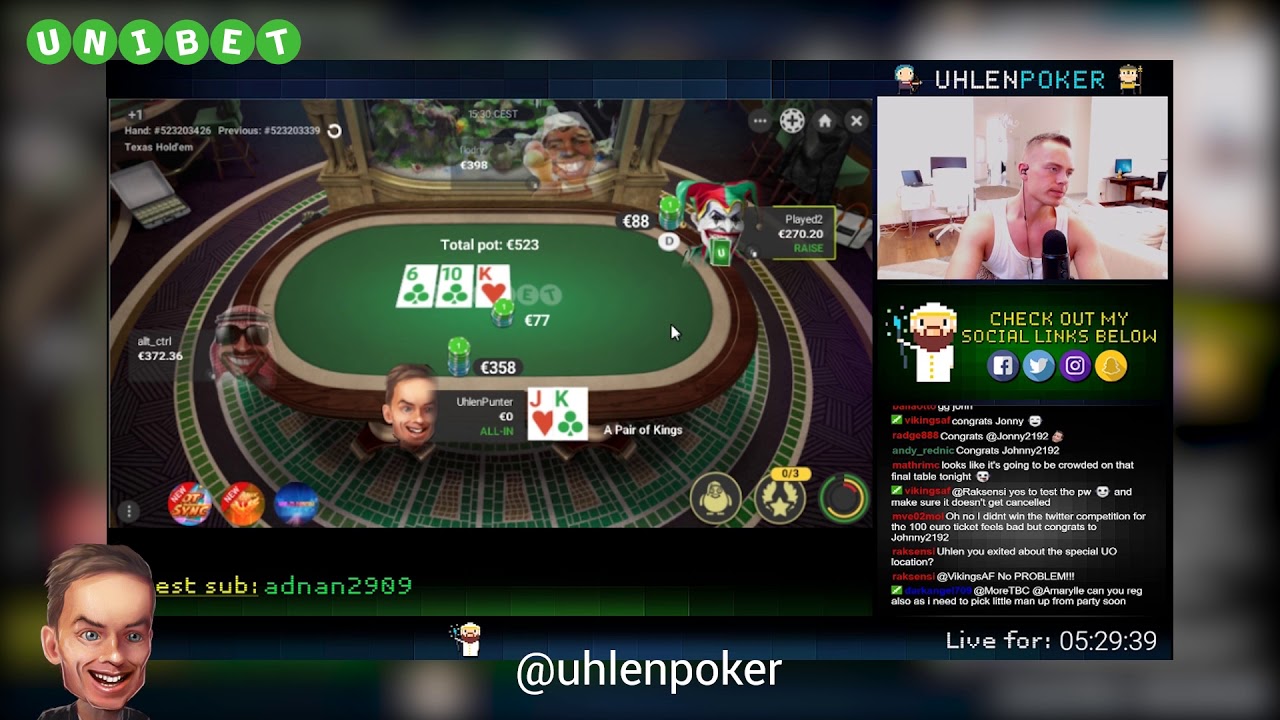 How much and how do you work on your game? Do you analyze with anybody regularly? What do you think is the most crucial part to be successful nowadays in the long run?

I do a few different things, but these days I would say most of my studying volume is done in the solver streets. I do hand history reviews and study sessions with friends sometimes too, as well as the occasional “content watching”. I feel like that one is kind of the lazy man’s way of studying though. In terms of hours per week, it depends a lot on my schedule and if I am traveling or not. To be perfectly honest I am pretty shit at getting enough studying volume in during travels. Also, the quality of studying tends to suffer when I am not in my usual habitat.

Do you feel more in your natural habitat when you can grind online or when you can travel more to live tourneys?

I feel the most comfortable with the online grind and staying at home. Having a good routine for exercise, meditation, healthy diet, consistent sleep, etc. is paramount IMO. Most of these things tend to suffer during my traveling. I do enjoy the live stops a lot though. I think having a good mix of the two is beneficial for balancing purposes. I would probably become an absolute hermit if I was just staying at home, clicking buttons and running solves. I think the optimal ratio for me is 80% GTO (staying home with a good routine) and 20% OOL (going to live stops, socializing, going to dinners, parties, etc). This way I can stay mentally healthy and happy – while still progressing at a rate I am happy with.

Recently you had a nice score at Unibet Open Sinaia finishing 7th, congrats on that one! Was this a nice, special experience for you? Malta Open is only two months away. Are you going there too? Which are your favorite live venues?

Yeah, the Unibet Open Sinala had a special feeling, as it kinda feels like “home turf” you know, being a Unibet event and all. It was a pretty awesome experience, having support from friends and fellow teammates there as I was getting deeper and deeper. For Unibet Open Malta I will most definitely be going. It’s very high up on my list for favorite Unibet Open stops. Mostly because of the weather and climate there, but also because I used to live in Malta – so I have quite a few friends there I can catch up with.

What other things are you interested in? We know you mastered in brewing science, do you have time and passion to do this nowadays?

I completed a masters in brewing science and technology a few years ago, with ambitions of creating a craft brewery in Budapest. I moved there and had everything set up and ready to go basically, before changing my mind kinda last minute. Basically, I was trying to do too many things at once, combining starting the brewery while playing a lot of poker and streaming on Twitch. I must admit that the same passion is not there these days. I am immersing myself so much in poker at the moment, that other hobbies (like beer and video games) have been shelved for the time being. Other interests are now mostly revolved around self-development. I try to stay physically fit by doing calisthenics/gymnastics (beginner level) and yoga, lots of stretching, etc. On the mental side of fitness, I am doing some meditation, gratitude journaling and other "hippie woo-woo stuff" of that nature. I am also an avid consumer of books, podcasts, etc. Mostly on self-development, health & fitness, investing and some wide topic ones like Tim Ferriss, Joe Rogan, etc.

We know you lived in Budapest for a while. How did you enjoy your stay here? Do you know any Hungarian players, if so, who do you respect the most?

Yeah, I lived in Budapest for half a year. To be honest, I spent most of my time there with my ex-girlfriend or on my computer, so I can’t say I got to know any Hungarian players all that well.

What about the nightlife? Which are your favorite clubs or bars here?

To be fair, I was a total life-nit while living there, so I am not the best person to ask. If I did go out at all, I always just went to nerdy craft beer bars to try new beers. Too old and boring for the OOL nightclub life.

And a must-have question, of course: what do you think about Hungarian girls?

To finish off with a short one, they are the nuts. Thanks for the chat!