Making Sense of ICM in Poker

In poker, ICM stands for “Independent Chip Model”. ICM assigns a monetary value to your chip stack in a tournament, based on your stack relative to the number of chips in play and the prize pool distribution.

But how does ICM work? And do you use it? This guide will answer these questions and more.

How Does ICM Work? 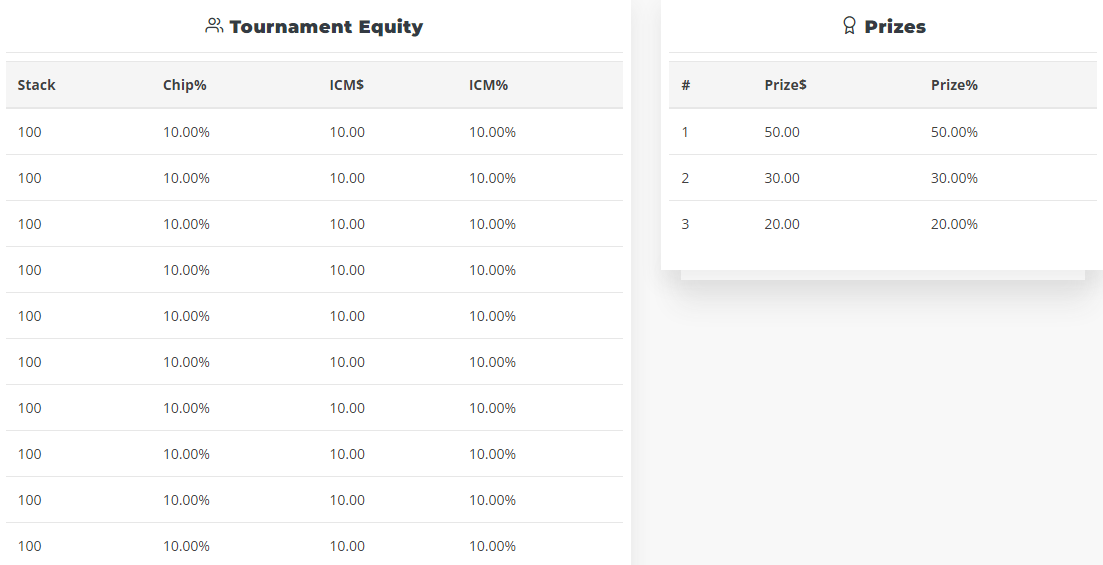 If Player 1 immediately doubles up to 200 chips through busting Player 10, ICM tells us that this player has not doubled his tournament equity. This is because the SNG is not a winner-take-all event, and rather divides the prize pool between 1st, 2nd and 3rd place. This structure, therefore, means that the best a player can do is cash for 50% of the prize pool, while also standing a chance of cashing for 30% or 20% for 2nd or 3rd place respectively. It’s these factors that ICM utilizes to determine the true value of each player's stack. By using an ICM calculator, we can see that Player 1’s true tournament equity is now 18.44% or $18.44.

The remaining tournament equity is evenly distributed between Players 2 through 9, with each gaining 0.19% or $0.19 equity from Player 10 busting. This makes sense since the field has been thinned and these players are now more likely to cash.

Prize pool equities inevitably become more complicated as each chip stack varies, but hopefully this gives some insight into ICM.

*Remember that ICM neglects to consider non-chip variables, such as skill, position etc.

ICM allows players to effectively evaluate their position within a tournament; this assists in their decision making during a tournament hand, especially in the later stages. ICM also helps to determine how the prize pool is distributed if a chop is agreed upon.

Consider once again our 10-man SNG example (outlined above). The SNG is down to its final three players. Having locked up $30, Player 1 is sat on a 500-chip stack, Play 2 on a 300-chip stack, and Player 3 on a 200-chip stack. How then, do these varying stack sizes adjust to ICM pressures?

If the short stack were to double up through the medium stack:

If the short stack were to double up through the big stack:

Players can improve their strategy for ICM spots by honing their MTT/SNG play with software like ICMIZER. Such software allows users to study and practice different aspects of tournament play, like the push/fold game.

Studying with the likes of ICMIZER is one way to add to your bottom line at the table. Another is through additional rakeback which you can acquire by signing up with an affiliate. Affiliate deals like the ones available at rakerace.com are thus highly recommended!

Hopefully, this article has helped you to better understand the independent chip model, and its widespread implications in poker tournaments. While ICM has its limitations (failing to consider skill, player position etc.), it ultimately allows players to better gauge their tournament equity. Studying ICM will undoubtedly improve your ability to navigate many of the complex situations that can arise during a poker tournament!