Home News Poker Rooms All you need to know about heads up poker!
News navigation

All you need to know about heads up poker!

*This can transpire in a tournament setting (when all other players have been eliminated), or a cash game setting (where only two players are present).

But what are the rules of heads-up poker? And what adjustments are necessary? This article will answer these questions and more.

At a heads-up table, the rules dictate that the dealer must post the small blind, and the other player must post the big blind. The dealer is first to act pre-flop, while the big blind is first to act post-flop. This maintains the correct order of play in accordance with the rules of poker. These rules are ubiquitous in the common flop-style games, whether that be in hold’em or omaha, tournaments or cash games.

One of the most glaring adjustments to be made when playing on a heads-up table is the need to play wider and more aggressively. Let’s compare button (BTN) opening ranges for 6-max and heads-up cash for example. Where the BTN will typically open 40-45% of hands in a 6-max cash game, the BTN/SB will open a whopping 80-85% of hands in a typical heads-up cash game; that’s an additional ~30% of starting hands! See below for a (simplified) representation of a BTN opening range in 6-max and heads-up respectively. 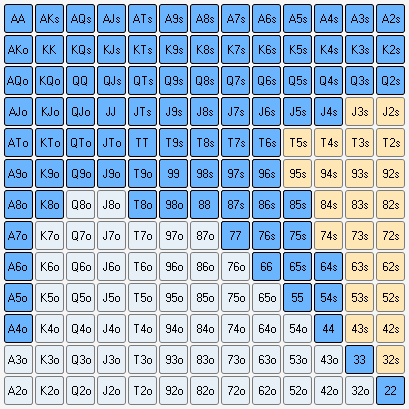 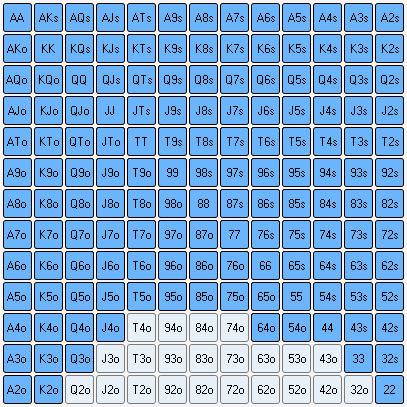 This adjustment manifests both preflop and postflop in the value of strong hands. Since fewer strong hands are made (as a function of the wider ranges), you must be willing to put chips into the pot and stack of lighter. This might mean betting more thinly for value or bluff-catching with lower absolute strength hands.

It’s also important to note that heads-up plays at a much faster pace than the likes of a full-ring table. This will have various implications; with constant action, the heads-up enthusiast may, for example, need to play fewer tables than their full-ring counterparts.

Playing more hands as is called for in heads-up play ultimately means paying more rake. By signing up with an affiliate, you may be able to offset this handicap through additional rakeback. Taking advantage of affiliate deals like the ones available at rakerace.com is thus highly recommended!

The Importance of Generating Heads-up Situations

Generating heads-up situations at a non-HU table is important for various reasons. Getting heads up:

One way in which a new player can generate more heads-up situations is to avoid limping preflop (which incentivizes multi-way pots by giving your opponents a good price to enter the pot by limping behind), and open raise instead.

Hopefully, this article has helped you gain a better understanding of heads-up in poker. In conclusion heads-up simply refers to any form of the game in which there are only two active players. When playing at a heads-up table, after familiarizing yourself with the rules, make sure to adjust by playing wider and more aggressively than you would otherwise. Finally, don’t forget the importance of generating heads-up situations at tables with more than two players!