#10 Out of position play, how to check-raise efficiently

#10 Out of position play, how to check-raise efficiently

Until now, we mostly covered situations when we had the initiative preflop. One of the most common, and thus most important, parts of defending is playing from the Big Blind out of position without the initiative. Meaning that someone from UTG to BTN has opened the action preflop, and you elect to call. 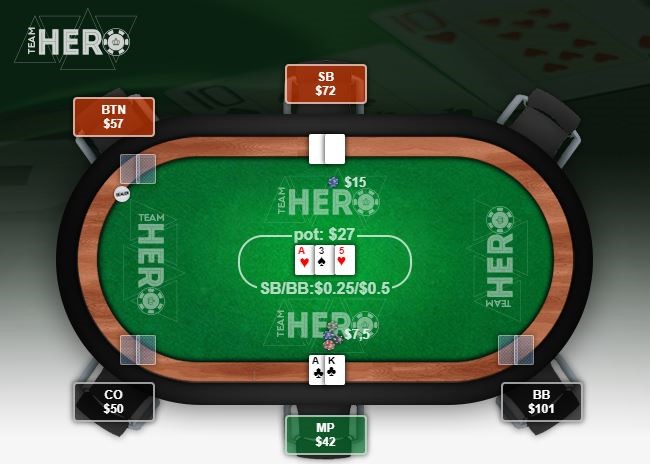 Remember when we discussed the same situation from the in-position player's perspective? Now we'll look at the other side of the coin. So the same applies here;

"To decide what strategy to use, you need to read different board structures. [...] In most cases, the preflop aggressor will have a range and nut advantage. This means the BB will lack certain hands (since he would 3-bet them preflop), which can lead to extremities like c-betting the entire range or even overbetting the flop sometimes."

We must establish an efficient strategy to avoid getting run over by good or aggressive players. We work with theoretically optimal strategy, assuming that on good boards for the BB, in position player would play a solid strategy with bigger sizings and polarized ranges.

We are still working with 6-max ranges, with 100bb effective. In the examples, we'll use BBvBTN ranges for better understanding.

When to take the initiative? (flop textures)

If you remember, we distinguished at least three different board types.

Many board types heavily favour the in-position player; thus, Villain can c-bet range on those boards with a small sizing. For example, boards like;

T .
Then there are somewhat neutral flop textures. Both players can have nutted hands, and the BTN only has a slight range advantage, if any, while playing with a wider range. It means BTN proportionally has more air-type hands in his range than the BB. Examples of this type would be;

Last but not least, boards that heavily favoured the Big Blind. The BB will have such a nut advantage on certain textures that the BTN cannot do anything about it. The best examples are low, connected boards, and paired boards with low cards, since BTN lacks such opening hands that the BB can profitably call, both suited and sometimes even offsuit combinations. Anything below 8 is a fine example;

Just a word about donk betting; The issue with implementing a donk betting strategy is that you'll have to make far more complex ranges. Since the flop, you already have to split up your range in a balanced way. That's why a poker coach wouldn't recommend such a thing to a beginner. We'll discuss this strategy in another article for advanced players.

We'll take the initiative by check-raising this time. You can construct check/raise ranges on almost all boards.

Of course, if BTN has such a nut advantage that you cannot compete, there is little sense in being aggressive. For example, on a QJT rainbow, we don't have AK, only K9, 89s to the straight. Moreover, we lack sets and have fewer two-pairs, zero overpairs and fewer strong top pairs.

Also, there are strong correlations between c-bet sizes and check/raise frequencies. The bigger the c-bet sizes, the more polarized the range is (or BTN has an enormous nut advantage, just like in the example above). Against a polarized range, there is less incentive to raise since we can fold out no middling and low EQ hands. 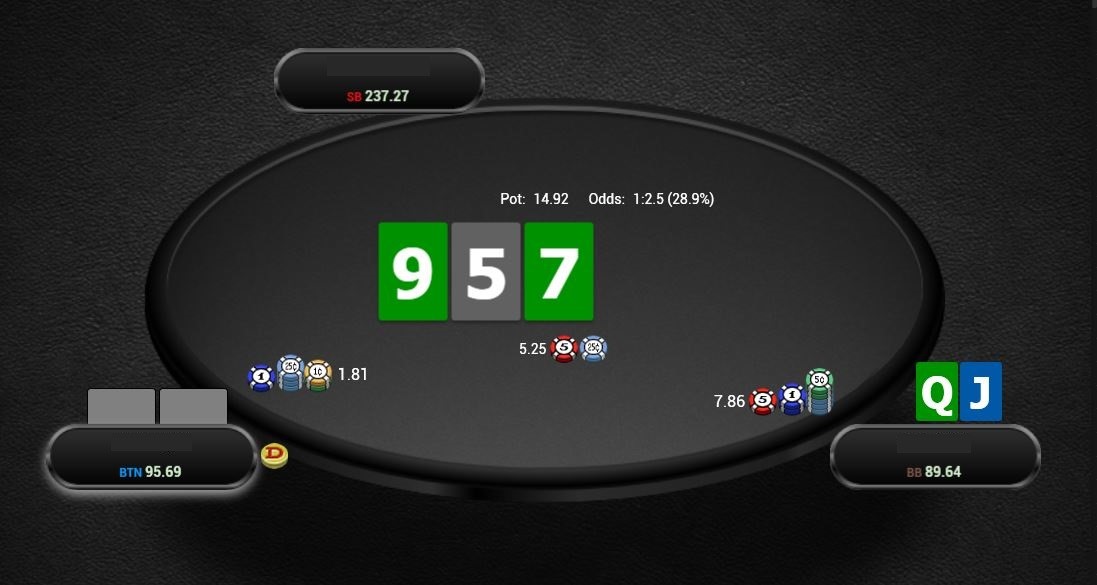 Who is your opponent?

Another factor you should consider is your opponent's position and statistics. If you think back to range interaction, different position pairs can lead to changes in certain spots. Where the BTN had a range advantage, he probably won't have any more.

Opponents play simplified strategies as well, especially on low stakes. They often execute the c-bet strategy poorly. It would help if you realized who those overly aggressive players are and punished them by checking/raising widely on boards that favour your range. Another thing you might notice lies in their statistics. On low stakes, the overall GTO c-bet frequency across all boards would be somewhere around 50-60%. Does it mean that those guys who c-bet 70-80+% are all terrible players? No, not at all. They simply exploit (sometimes unintentionally) the fact that the player pool doesn't check/raise often enough. But if you see a player with high c-bet frequency, you have a target for taking the initiative. Combine this with stats on how much he bet/folds on the flop. You are good to go if that number is high too.

We'll check/raise far more on board where we face high c-bet frequencies and small sizes. On dynamic boards, we usually want to size up, while on a static board, a smaller sizing is advised. The bigger the c-bet size, the smaller we want to raise. Just to have a rough idea, let's say that against a 1/3 c-bet, we make it like 5-6x raise on a dynamic board, while on a static board like A55r, we can size like 3-3,5x.

Hand selection (with what hands and how frequently)

Let's take a look at an example for clarity, which type of hands to choose;

2 we face a 1/3 c-bet. We should include our strongest hands (sometimes we have so many that we take into consideration to don't block calling range), like 88, 22, and K8s, and some middling hands, such as strong top pairs (like KQo).

We need to be creative with our bluffs on disconnected boards like this. First, we want some extra EQ. Backdoor EQ hands can help to achieve that. On the other hand, we don't want to block fold equity, so hands that don't connect to the board but likely fold out the same type of hands are bad candidates. Please take a look at the table below. A3s and A4s with a backdoor flush draw are great examples. They provide the possibility to continue bluffing when improved on the turn, and at the same time, the hand itself can outdraw top pairs by hitting the ace. A similar example is the 52s, which have similar characteristics. It won't become a top pair tough but could improve to a two-pair or three-of-a-kind.

Other candidates are JTs, and QTs with a backdoor flush draw. By not only having the backdoor potential but blocking some stronger top pairs in Villain's range. 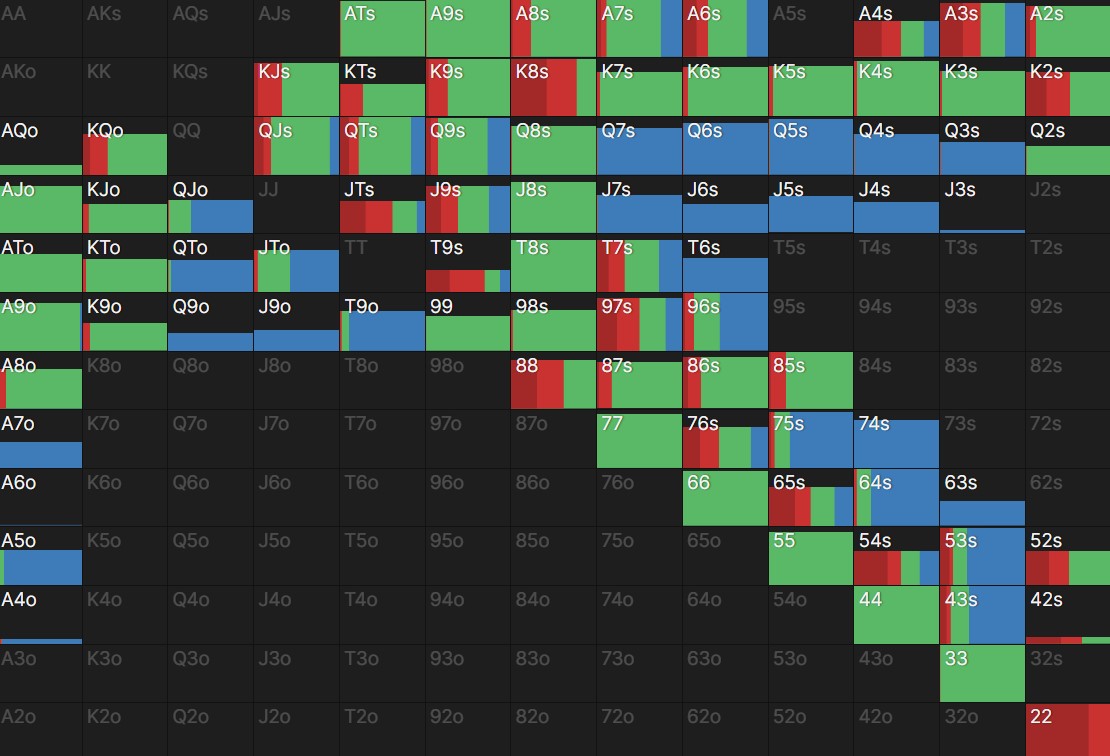 The overall frequencies vary roughly from 6 to 24% if we don't have a donk betting range. Certain hands are virtually always check-raising (in the example above 22, as a nutted hand unblocking Villain's calling range), and others are sometimes raised 30-70%, depending on their blocking scores and (backdoor) EQ.

To defend efficiently from the BB, you sometimes need to take the initiative. It can be achieved by donk betting or check-raising. We covered here the latter. The most important thing is that you need to read different board structures, focus on your opponent's deviations from the optimal play, and execute an aggressive check/raise strategy. Constructing these ranges takes time. So don't wait for the opportunity to try out in-game. Instead, practice and build these ranges outside of the table.